Belief: Everyone has figured something out that I just can’t seem to. No one understands me.

Deepest Fear: That they are too complex, flawed, unique, or abnormal to be accepted.

Deepest Desire: To be celebrated for their individuality and the things that make them special.

How they see/justify their sin: Being jealous of others drives them to a kind of self-condemnation. Surviving the resulting depression and avoiding being a burden to others is the best they can hope for.

The 4 is the side of our soul that expresses its uniqueness, individuality, and creative ability. There’s a reality that only the 4 side of us can define that is our us-ness, the person we truly are that differentiates us from everyone else on earth. As you can guess, the challenge is whether or not we believe it. The 4 is in the constant struggle between accepting the one-of-a-kind nature of who they are and living in immense doubt, insecurity and questioning the value of who they are. The sin of the 4 is “Envy” but not for other people’s things, but more so in what they know. 4’s believe that everyone has acquired, procured, or learned something that they have somehow missed. They always believe they are one step behind everyone else and are convinced that they are too complicated to be understood. “No one understands me” is the mantra in the mind and heart of the 4.

4’s can be withdrawn, moody, prone to depression but also incredibly artistic, creative, imaginative and innovative. If they can move toward their virtue (“Equanimity”) they can embrace the truth that they are just like everyone else, completely special and unique. 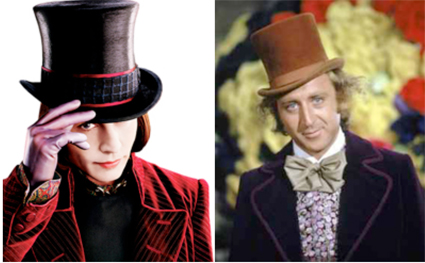 The exaggerated persona of a 4w3 is Willy Wonka. The more extroverted and social of the 4 spectrum, the 4w3 works to promote their one-in-a-million persona to the world around them because being seen is the greatest source of validation one could hope for. 4w3’s tend to be performers, exhibitionists, and artists. They are the people on the street with style and aren’t afraid to show off their style, creations, or discoveries.

Willy Wonka is once such character. He is completely one-of-a-kind from his garish outfit to his flashy, innovative way to promise an elite presentation of his borderline ridiculous method of making sweets. While he withdraws from society when he’s taken advantage of (I’m combining the stories from the Gene Wilder’s 1971 adaptation and the Johnny Depp 2005 remake) but once his canvass is painted it’s time to let people see his creation.

Even though Gene Wilder’s character is almost a complete ruse (compared to Johnny Depp’s more flawed, angsty representation) if we analyze the character we know until that big revelation we can see a fairly consistent 4. Even the outburst at the end of the movie when he accuses Charlie and his Uncle Joe of stealing from him is all a belief that no one could possibly understand the world he’s created.

Johnny Depp’s Willy Wonka is elitist, condescending, and pretty pessimistic about this entire contest. He protects himself by presenting a cynical, resentful attitude to the group and pretty much can’t wait for the tour to be over. His psychological trauma of being humiliated by his 1 father who’s forbidden him to eat candy and forces him to wear extensive dental headgear instead goes unaddressed until he ventures out on this regretful enterprise. We see a character who’s not only a protagonist 4 but one who is living into his grossly unhealthy disintegrated “2” (the sin of “Pride” which says “I gave you a chance and exactly as I expected, you let me down, you don’t get me, and you never will. I was right.”)

We want Willy Wonka to be rescued from his despair. We want him to know he’s special, that he’s seen and known and no matter how high his freak flag flies, that he’s loved.

The other end of the spectrum has a 4 embracing their 5 wing and becoming insatiably curious to try and figure out what’s wrong with them. 5’s are the researchers and learners and tend to become experts in areas that are both very specific and very irrelevant to everyday life. 4w5’s are the most withdrawn and introverted spot in the group but believe the explanation must be out there.

Neo from the iconic film The Matrix is an example of a 4w5. Neo has this literal sneaking suspicion that something is being kept from him. It’s literally “everyone knows something I don’t know.” And Neo goes to extreme measures to figure it out. When Trinity meets him the first time she has him hooked the second she dangles an explanation for his questions in front of him. He’s willing to give up the entire fake life and live in the pain of the real world because in true 4 fashion, equality in the suffering is better than being the oddball in the fantasy world.

Not only does he escape the fake world but he learns that he really is unique, that he is destined to be the savior of the small bit of humanity left, The One. While Morpheus, Trinity and the gang support him however they’re able, he still lives with the belief that no one could possibly understand what he’s going through.

What we see in this character arc is a 4 who integrates (at the end of the trilogy) into their 1. This integration sees a 4 who stereo-typically defines reality by how they feel and integrates into living according to an objective, absolute external set of principles. He does what is right not because it feels right, but because it is right. He’s The One and The One has responsibilities.

As we saw in both these examples, the 4’s integration into the 1 and disintegration into the 2 has to do with where the 4 finds truth. The goal is that they will move away from their emotions and into their convictions. We want characters to get over themselves and find a purpose in the world beyond their ridiculously indecisive romantic entanglements. 4’s who disintegrate to their 2’s can get clingy to their support connections and reject any help whatsoever. When they lose hope, they can tend to isolate and retreat into a fortress of misunderstanding and irrationality.

Healthy 4’s can be deep, loyal, romantic, insanely creative and artistic individuals. They’ll add some incredible flare to your ensemble and intriguing depth to your story.

4’s can be sympathetic as we all want to reach into the pages or through the screen and plead with them to accept that they matter. The challenge with 4 protagonists is not letting their iron-clad belief that the world is incapable of figuring them out make your audience give up on them. 4’s are waiting for confirmation that they are exactly as strange as they fear they are and they have are exceptionally patient. If your character doesn’t eventually move or give us a glimmer of hope that they might actually overcome their doldrums we might just stop caring. If the story is a “descent” story you’ll need to start them (or have them reach) a really healthy place for contrast.

If you’re a Harry Potter fan, consider Severus Snape, the notoriously aloof, borderline cruel Potions master, who is desperately trying to overcome the pain that threatens to affirm his greatest fears. He creates a persona of high competency, no-nonsense, unapproachability, and elitism that helps him cope. But even when we do get to see him authentic in his memory with Dumbledore he, one more time, finds himself misunderstood. While he ultimately ends a hero, we unfortunately only get to see one heroic act compared to his years of emotional abuse of Harry and his classmates.

Showcase the 4’s creativity. What they’re able to produce can be incredibly unique, colorful and wonderful. Consider the “goth” character in TV or movies or the teenager who is ultra-alternative. It’s a moment of vulnerability for the 4 and one that can be easily shown and exploited.

4’s can have a love/hate relationship with 3’s as 3’s take on the challenge of trying to understand the 4 and the 4 pushing back on that intense effort by working even harder to find the irrational reasons why it’ll never work.

7’s and 8’s can also be wonderful supports but also the worst villains for the 4. 7’s can get frustrated with the 4’s inability to have fun and 8’s can simply demand the 4 stop being so self-absorbed and get moving in the right direction.

4’s and 1’s can have a tenuous relationship as 4’s crave the conviction of the 1’s and innate ability to understand right and wrong but are irritated when 1’s disregard their valid emotions and simply expect them to move in spite of them.