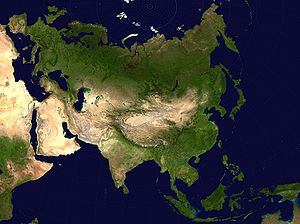 We’re in the home stretch here. I’ve held off on Asia because of a couple different reasons, the first is that Asia intrigues me more than just about any other continent, and second, because it’s absolutely huge. The variety of dominant cultures contained within the continent of Asia is more dramatic than just about anywhere on earth.

The middle eastern, soviet, Indian, and mosaic of oriental cultures notwithstanding, the variety of dominant religious hubs is among the most pronounced of anywhere else. Three of the world’s most popular religions call Asia their home. Hinduism, Islam and Buddhism all have their roots planted firmly in this area of the world and cultures in Asia have their distinction as much from their preferences and tastes as they do from their religions (or lack thereof when considering the strong atheistic stance some countries take).

muddy or silty, rising light of the East, resurrection

It’s marvelous to consider how a clash of such dominant cultures exist side by side and share a prophetic name. As with all the continent’s we’ve looked at, there are a variety of opinions about how and why the continent received its name. “Muddy” is a strong picture and could be descriptive on a number of levels.

In considering the Buddhism of eastern Asia for example, differing countries have differing stances on Buddhist doctrine. It plays out in the mixtures of these religions with common folk religions and superstitions. However, I believe a case can be made that the inhabitants of Asia, regardless of their religious affinity, understand the idea of devotion. Nowhere have I found such contrition and sincerity than those who practice Islam, Hinduism or Buddhism. It has been a convicting journey as I consider the sacrifices and disciplines I employ for my own religious stances.

And yet, written in the name is another meaning. Long has Asia been referred to as “the East.” It’s even said in Luke 2 that “kings from the East” followed a star which led them to Bethlehem. The rising light of the sun is the promise of a new day, a “resurrection” even. As we look at the diversity of beliefs, we can stand on one promise: there is a dawning light in Asia.

ASIA! WE CALL TO YOU AS CHRIST DID TO LAZARUS! COME FORTH!

Forsake your ways and commit your sincere, contrite hearts to the one true God. The Creator has a desire for intimacy with you. Live no longer as slaves. CLEAR THE MUDDY WATERS and walk forth clean and unblemished. From the middle east to the frozen north to the far orient BE RESURRECTED and show us all what new life truly means!

Afghanistan – land of the Afghans Armenia – assemble or create

Kyrgyzstan – land of 40 tribes Laos – land of a million elephants, son of a pagan god