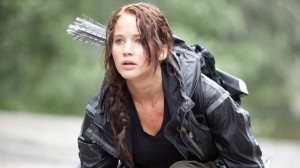 There are dozens of analogies and parallels I could continue writing about. The Hunger Games is not just an entertaining book, it’s a banner, a heart cry of a generation and we should pay attention to why that is.

We’ve talked about the morality of the story and why we’re intrigued by what’s right and wrong in this story. Then we discussed the identification with the harsh reality of the setting and our quick acceptance of the story that must take place in this time in this place.

There’s something to The Hunger Games itself though that I think connects with each of us independently.

The Hunger Games arena tests your limits. Our world has become so convenient and soft that we have no way to test our mettle anymore. We’re all asking the question: “could I win The Hunger Games?”

I saw this come across Facebook: “I jog because I know I’d be the first to die in The Hunger Games.” There’s something to this…it’s funny because it’s true. Could we outrun the faster opponent? Could we shoot straight? Could we throw accurately? Could we survive? Would we think about the smoke from our fire? Would it occur to us to sleep in a tree?

We’re trying to compare ourselves. The successful stories nowadays are ones where the world can be understood. Harry Potter is a perfect example. Everyone, even the most casual of skimmers would know that “expelliarmus” disarms your opponent. By the time Harry Potter reaches its later books, we’re arriving at the conclusion that the Polyjuice potion would be a useful tool in the plan before JK Rowling is telling us about it.

We want to understand the world because we want to determine what we’d do and the bigger question: if we could.

Limits are a big deal for our spiritual formation, especially in today’s culture. Moving from “I can” to “I can’t” is a line we rarely cross, are terrified to cross, are compelled to cross and fantasize about crossing. The stories we’re reading give us a shortcut. They’re proposing new challenges in new scenarios with physical, emotional, and mental components and we’re entertained not solely through the observation but from the question.

To this generation: there are real challenges in the world. If you really want to see what you’re made of and if you really want to see if God is who He says He is, we can take that journey. It doesn’t have to be enough to fantasize about what could be or what’s possible, we can see and I guarantee this: you’ll learn something that will change your life.

Next post I want to get back to our name study of the continents of the world. I’m fascinated by what I’ve found out and hope it inspires you the way it has me.