Four years ago Michael Hindes and I sat across a table from one another and sized each other up.  Four years later, I’m proud to call him one of the most significant voices in my life and one of the most inspiring leaders I’ve ever had the privilege to follow.  When I thought about featuring families, I wanted to dive into the Hindes family and see what I would find.  I was originally only going to do Michael and Kathy but their three sons were too good to pass up.

I loved this surname when I looked into it because of the contrast with the family’s first names (especially the men).  Hindes means “one who was a domestic servant.”  With the incredible leadership anointing on this family, their name is a beautiful note of humility.  I’m reminded of Matthew 23:11 that says he who is greatest among you should be the servant of all.  What an incredibly apropos reminder for those called into leadership.  The humility and sobriety wrapped up in this meaning is a challenge to the rest of us.

Michael is one of my favorite names I’ve researched.  It’s the only name I’ve come across whose meaning is in the form of a question.  Micheal means “who is like God?”  I’m reminded of Isaiah 6 where the Lord asks “whom shall I send?” and Isaiah replies “here am I, send me!”  When hearing the name Michael, you should hear the heartbeat of the question “who is like God?”  and be compelled to answer “ME!  I AM!”  Michael has his own prophetic story of his name.  For years Michael went by the nickname “Mickey.”  To make a long story short, through a process of deliverance and healing, Michael received this word: “‘Mickey’ is a mouse in Orlando, ‘Michael’ is captain of the Lord’s angelic army!”

Roy is interesting and has the basic meaning “red-headed.”  But an alternate definition is “king.”  I think the mantle of leadership is clear here as is the accompanying charge.  What a wonderful balance to have “king” and “servant” wrapped up in the same namesake. 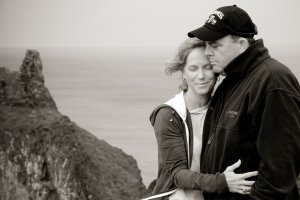 Kathleen is a variant of the name “Catherine” which means “pure.”  The innocence and holiness that comes with this name is one that Kathy has lived up well.  Those that know Kathy well would agree that there’s a regal quality to her persona and identity.  It’s a reputation all would stand and applaud.

Ann is a fairly common middle name, probably the most popular I’ve researched to date.  The name means “gracious” and “favor.”  It’s not a bad name to be so popular!  If Kathy is anything other than “pure” is that she is “gracious.”  My personal interactions with Kathy are marked by her consistently one-upping herself in her graciousness.  “Favor” isn’t too far from the truth either.

Barthel is Kathy’s maiden name.  It took me a little while but I eventually came across an etymological description.  Barthel means “son of the one who owns many furrows.”  Basically, “one who owns many plots of land.”  There’s a wealth, prosperity and abundance wrapped up in this surname.

Nicholas is a good name as I have a brother with this name as well.  Nicholas means “victorious” (as do its many variations: Nichole, Nick, Nicolette, etc.).  I believe “victorious” is a wonderfully redemptive meaning.  In Nick’s story, I’ve heard and seen a road traveled of questions, fears, and struggles.  The constant reminder of “victory” and victory that’s already been won is not only a testament to Nick’s character, but to the work of the spirit of God in his life.  Those who have had to fight for victory understand it with a sobriety some of us will never understand.  The charge associated with this name is this: lead others to victory and claim it alongside them.  There’s a clear picture of why Nick has been called to the ministry wrapped up in his name. 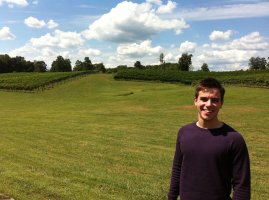 Jason means “healer.”  The work of restoration is a noble endeavor but one that takes time.  Sometimes healing has to be chosen.  Have you ever noticed the relationship between morale and health?  Stress can kill you, joy can save you.  I say this not from a “be happy” standpoint, but for the battle that sometimes wholeness requires.  Jason as a mythological figure is best known for being the leader of the Argonauts.  He was a mighty warrior (and Jason’s middle name “Michael” as reflective of the captain of the angelic army supports this).

Wade as a word means what you think it means: “to go knee deep through water.”  However, as a first name, Wade means “to cross water.”  Think of the parting of the Red (Reed) Sea or the parting of the Jordan in scripture.  It was a magnificent act of God and books have been written on the process.  Parting the waters, and “crossing” them denotes a journey.  Just like all the names of the Hindes’ sons, there’s a road to walk written within their names.

You can read more about Michael, his ministry and his family at: Michael Hindes’ Blog and The Gathering.

I’m going to begin to land the plane on this series of blogs.  Next week I want to focus on names I’ve found particularly inspiring that you’ve sent me and names I’ve researched that I really like.

This will be the last blog I’ll advertise to accept names into the pool.  I’ve been steadily going through the names you’ve sent me and I’m down to about 40 to go.  Don’t think that I won’t get to it because I’m making good time and it’s no bother to me to add your name to the list!

Leave a comment if you want me to pray into it: full legal name, no commentary.

14 Replies to “Prophetic Families: The Hindes”