I’ve been on this kick lately of being obsessed with people’s names.  There’s something deeply prophetic about names.  I don’t know how much spiritually gets transacted when someone is given a name, but I’ve been given too much evidence that your name says something about you.

Either names make the person or the person becomes the name, but I believe even in the garden, it was important for things to have names.  Adam’s first assignment was to name the animals.  Every time God created something in Genesis 1-2 he “called” it something.  And at the end of it all he said this: it was good. 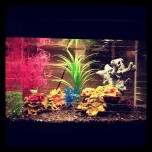 I have an obsession with naming things.  I recently got a fish tank and even though several fish have died, my first agenda upon purchasing my first eight fish was to promptly name them.  It’s been a fun task and my roommates and I have agreed to name our fish after our mutually favorite sit-com characters.  I like things having names.

I’ve recently done some research into the meaning of my name and several others around me and I’ve been astounded at how accurate and insightful they have been.  For example, here’s my name and what I’ve found:

James  – I’ve always liked the name Jesus gave the brothers James and John (his disciples) which was “Boanerges” which meant “sons of thunder”.  I’ll take it!  That sounds awesome!  But James is traditionally understood as a derivative of Jacob which means…get ready… “supplanter.”  I can’t tell you how disappointing that has been every time I’ve looked it up because really, I’ve had no idea what its meant…until recently.  “Supplanter” means to overthrow and take the place of another.  Think back to the story of Jacob and him taking his brother’s birthright.  I always saw this as an undesirable namesake, who wants to be that guy?!  But recently I had someone explain a different perspective: what if you were supplanting something that was supposed to be supplanted?  For example, if in Matthew 4 Satan was correct when he said that all the kingdoms on earth had been given to him, then wouldn’t he be worth supplanting or dethroning?  ABSOLUTELY!  I want to be THAT GUY!  Now, while that might be one interpretation, I believe at the very least that “supplanting” is my choice.  If there’s a prophetic edge to this, it’s my choice to determine what I’ll do with it.  I don’t have to be this person, but it might be that I’m supposed to be.

Patrick – I got some strong family heritage in this name.  There’s a whole wing of the family with the last name Patrick.  Simply put, it means “nobility.”  This is getting better and better, dethrone the enemy and take that throne for the kingdom of Christ!

McCarty – The “Mc” is an Irish thing.  When the Irish immigrated over to the states, many of them added the “O'” or “Mc” to the front of their name so they could hold on to some heritage (I’m okay knowing where I came from…that’s good stuff).  But McCarty is basically “loving.”  There it is.  I knew there was some pastoral truth tied up in there.

It’s possible that my name (especially given that I’m a “Junior” as well…carrying on my father’s legacy) could be part of my destiny.  Usurp the enemy’s entitlement to spaces and hearts.  Take the throne of those spaces and living like royalty (which comes with its expectation of leadership, governance and oversight).  And above all else: love.

Wow…that’s powerful (and I wrote it… LOL).

I’m convinced that names are either going to be highly reflective of what is obvious, or are going to prophetically speak what is most challenging to overcome.  Living up to a name is an admirable endeavor.

I’d like to do a couple of blogs where I pray into the meaning behind some of your names.  If you’re interested, leave me a comment or e-mail me and I’ll see what I can do.  Be sure it’s your legal name and include your middle/first name (depending on what you go by).  Don’t give me any commentary, I want to pray into it and see how the Lord speaks.  I’d like to post what I find here so be sure to let me know if that’s okay with you.

32 Replies to “Prophetic Names – My Name”